Edo State Governor, Mr. Godwin Obaseki has revealed that his administration would massively invest in the Oil Palm sector in its quest to diversify the state economy beyond crude oil.

The governor announced this yesterday at the Edo State Government House in Benin when a 14-member committee set up to develop an oil palm plan for the state presented its report to him.

He said: “Oil Palm is our new crude oil; it will be the key driver of our development. The state still has one of the largest estates of oil palm, which have the highest yield in the country. We want to leverage on our high-yielding varieties and long tradition of oil palm production to acquire about 100, 000 hectares of land for the development of oil palm estates. The production will be of global standards and yield”.

Continuing, the governor commended the committee members for their efforts towards gathering the report assuring them that the government would acquire the necessary resources to execute the project.

‘’We will, within the next two weeks, create a smaller team to come up with a work plan on how to execute the feasibility plan, work out the image capturing of the land to be used, and get the involvement of the host community for the project.

Meanwhile, the committee Chairman, Toni Ogunbor, explaining the report, revealed that the committee recommended four key issues in the report that need to be addressed to bring the project to fruition.

These were land development, provision of security, infrastructure and the need to have data on soil and weather conditions. 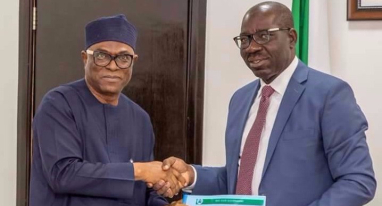 Contact Us Now
We use cookies on our website to give you the most relevant experience by remembering your preferences and repeat visits. By clicking “Accept”, you consent to the use of ALL the cookies.
Do not sell my personal information.
Cookie SettingsAccept
Manage consent

This website uses cookies to improve your experience while you navigate through the website. Out of these, the cookies that are categorized as necessary are stored on your browser as they are essential for the working of basic functionalities of the website. We also use third-party cookies that help us analyze and understand how you use this website. These cookies will be stored in your browser only with your consent. You also have the option to opt-out of these cookies. But opting out of some of these cookies may affect your browsing experience.
Necessary Always Enabled
Necessary cookies are absolutely essential for the website to function properly. These cookies ensure basic functionalities and security features of the website, anonymously.
Functional
Functional cookies help to perform certain functionalities like sharing the content of the website on social media platforms, collect feedbacks, and other third-party features.
Performance
Performance cookies are used to understand and analyze the key performance indexes of the website which helps in delivering a better user experience for the visitors.
Analytics
Analytical cookies are used to understand how visitors interact with the website. These cookies help provide information on metrics the number of visitors, bounce rate, traffic source, etc.
Advertisement
Advertisement cookies are used to provide visitors with relevant ads and marketing campaigns. These cookies track visitors across websites and collect information to provide customized ads.
Others
Other uncategorized cookies are those that are being analyzed and have not been classified into a category as yet.
SAVE & ACCEPT
Translate »